“One hundred thousand crickets…in your basement?” With this excerpt from a recent conversation, Eric Palen, a local entrepeneur who is in the business of farming insects as food, raised a lot of questions and even more eyebrows about this growing trend. After the “gross factor” fades, the facts emerge. It turns out we’ve found a new source of protein that’s compelling for… well, a number of surprisingly good reasons.

Nearly 2,000 insect species are already a part of diets across the globe and they’re making their way to North America in a variety of forms. In fact, the global edible insect market is forecasted to grow to $153.9M in North America by 2023 and over $1 billion worldwide.1

As the world population grows along with a demand on global resources, alternative protein sources are a heightened concern. Insects take less of a toll on these resources while still delivering a compelling nutrition profile. 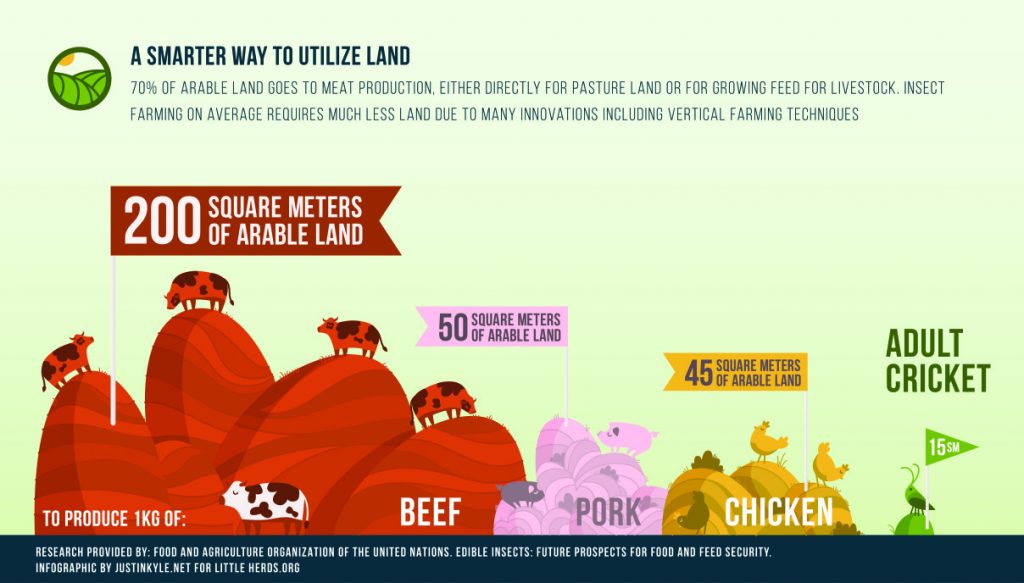 In conversation with Palen, post-growth production of cricket protein is pretty straightforward. To harvest the crickets, he freezes them before washing, boiling and roasting them. From there, they can be consumed in “whole cricket” form or alternatively, ground down into a powder for use in smoothies, chocolate, protein bars or breads.

On the nutrition front, crickets (whether in “whole” or “powder” form) contain comparable levels of protein to beef and higher levels of iron. They are considered a complete protein source – containing all of the essential amino acids, omega 3 and 6 fatty acids, and are high in both calcium and vitamin B12.2 It is easy to see why this food source would be explored further as we begin to think creatively about how to effectively feed a growing world population.

Environmental and nutritional considerations alone don’t make me want to top a Cobb salad with roasted crickets. That being said, we can’t overlook the logic in why and how insects might be a part of the North American food pyramid moving forward. Already commonplace in many large markets around the world, it may just take some time – and experience – to find out how they fit.

As cricket powder and flour makes its way into mainstream through more familiar formats, like bars and breads, there will be a more approachable delivery to educate consumers on the social, environmental and nutritional benefits of insects as protein. It will be an important link in the food chain to keep an eye on as it brings up real issues of “food and footprint” – and how we responsibly balance impact with real consumer demand.

Not unlike most new product launches, crickets and other insects will likely gain adoption through innovators and early adopters. Eating an insect is, admittedly, a highly Instagrammable moment, and we see that venues and restaurants have an opportunity to lead from two primary places: experience and culture. Outside of the “wow-factor”, many insect dishes are traditional to various regions and offer chefs a new product to experiment with in menu development. When it comes to edible insects, powder may increase in quantity more rapidly, but whole form will drive awareness with visual impact.