Sanderson Farms isn’t backing down from its antibiotic use in poultry, despite most major players in the poultry  industry moving toward “no antibiotics ever”.  Faced with mounting customer—and shareholder—criticism, the company released a comprehensive infographic backed by outside professional resources explaining its position. 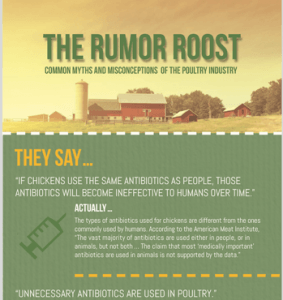 The experts are reputable. The facts are correct. The rationale is sound. Yet I’m willing to bet this newest effort will fall on mostly deaf (and likely defiant) customer ears.

At their 2017 Iconosphere research presentation “Untruth and Consequences,” strategists Lindsey Roeschke and Derek Stubbs argued when customers accuse brands of lying—as many Sanderson Farms customers have done when it comes to the safety of their chicken products—it has little to do with facts. Roeschke and Stubbs point out that today’s customer increasingly believes that a lie is “anything I disagree with.” We are now called liars when our company’s actions suddenly misalign with our customer’s personal values.

Roeschke and Stubbs aren’t alone in this assertion; the Oxford Dictionaries declared “post-truth” as the word of the year for 2016. Sanderson Farms’ current situation illustrates that post-truth has moved from politics to plate.

Sanderson Farms would be more successful if they reprioritized its communication to values-first, facts-second.

The problem isn’t Sanderson Farms’ position, it’s how the company is arguing it. The company’s current approach seems to be “our facts are better than your facts;” an argument that is unwinnable with today’s customer. The disconnect here isn’t about facts. It’s about customers feeling that the safety of themselves—and their families—is at risk and their concerns aren’t being acknowledged.

Changing our approach to prioritize values alignment requires us to rethink how we talk to customers about hot-button issues.

Identify the real issue. By looking beyond what they say, to what they mean, we can address our customers’ real concerns.

Share their concern first. By acknowledging—and sharing—their real concerns upfront, we are putting our customers’ needs ahead of our own.

Follow it with the facts and/or company position. Facts are still important. But facts only matter when we trust the source. By placing values first, we help to build customer trust.